This has been a day of not accomplishing much.  I did hoop and embroider two sections of the 30 day challenge quilt.  Then on the third one, the hooped popped.  I put it aside as I have to take out all those stitches and do it over. That’s a chore for tomorrow.  I have cut out two flowers for my wall hanging.  I  tried to sew while sitting on the porch.  The wind came up and the fabric didn’t want to cooperate.  The weather was so nice that I sat and read some magazines.  No sewing on the porch today.

We had a horrendous storm yesterday afternoon. It poured.  We had lightening.  Then came the wind and the hail.  The hail was going sideways against the windows.  It’s a wonder that the windows didn’t break.  The noise of the wind and hail was so very loud on the roof and the side of the house.  Miss Molly found a place to hide.  She didn’t come out until three A.M. this morning.  We were very fortunate.  I heard that some people lost shingles and trees were down.  It did cool down for a little while.

I’m so thankful for perennials.  They come up and blossom, even if I neglect them. My flowers are beautiful.

I had a big surprise at the Maine Show.  As I said in another post, I didn’t receive a ribbon at the show.  When the show was over, I was waiting to pick up my quilts.  A few ladies were sitting at the table waiting with me.  One of them started talking about the viewers’ choice quilt.  She started describing it and saying how awesome it was.  Then she said it had the word Butterfly and another word in the title.  I asked her if it was Basket and Butterflies as that was the name of one of my quilts.  She wasn’t sure so I walked across the room to ask the woman who was in charge of the forms.  She opened her phone and showed me a picture of my quilt, Basket and Butterflies.  It had a ribbon on it.  Wow!!!! Viewers’ Choice is an awesome award.  When a ribbon is received from the judges, it is just the opinion of two people.  With the Viewers’ Choice, it is the opinion of many fellow quilters.  I am deeply honored to receive this award.  I had decided before the show to retire this quilt from competition.  It is retiring on a good note. 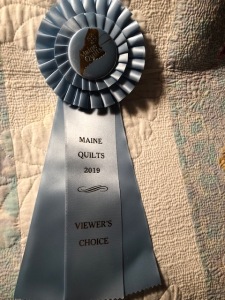