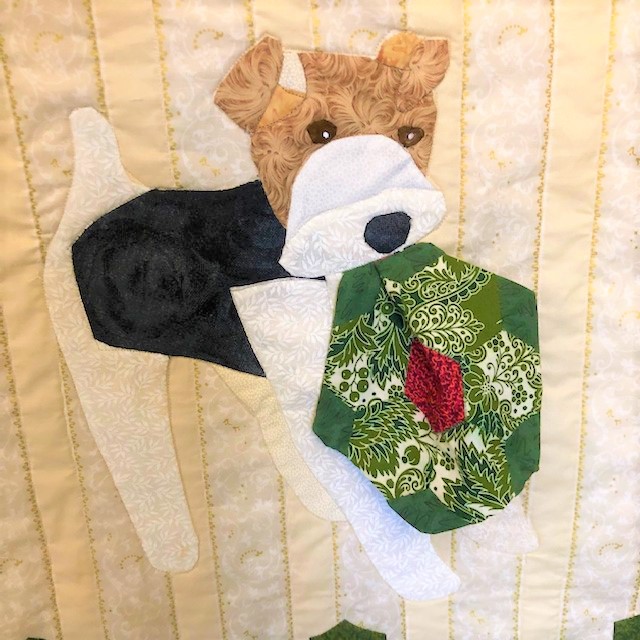 The weather has been beautiful.  My days have been spent raking the lawn, picking up branches and pinecones.  Today, I fertilized and limed the lawn just in time for the rain.  I also reseeded where the lawn was winter killed.

Tomorrow, I will start to do it all over again in Maine.  When I get back home again, I’ll plant the flower seeds and hope that the flowers will grow and be beautiful.

In the meantime, my sewing room is neglected.  When the Spring cleanup is finished, I’ll have more time to spend sewing.  The gardens will just need a little weeding and deadheading.

I’ll have to blog about pieces made in the past, not what I’m working on now or finished ufos for a while until I can get back to the machine. 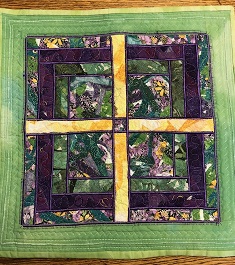 The made fabric was bulky so I butted the pieces together and then  zig zaged the seams.   All of these scraps came out of the waste basket.  Garbage to Gaa-Barge. 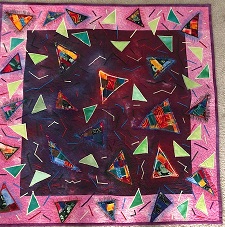 This was a fun gaa-barge to make.  The background is a hand dyed fabric that wasn’t the color that I intended.  Lots of little triangles were sewn down with a zig zag stitch.  Then some stippling and thread painting.  It is larger than most of the gaa barge pieces.  It’s about 20″ x 20″. 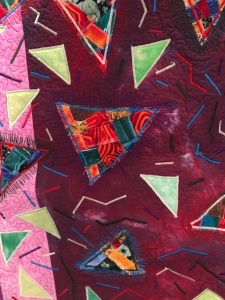 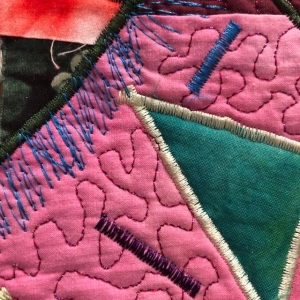 Miss Molly is inspecting the piece.  She looks as if she is still thinking about it.  I don’t know whether she’ll approve it or not. 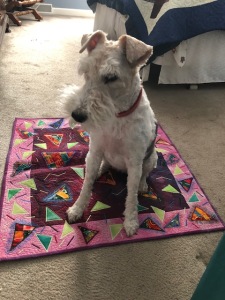 Have a great day and happy quilting

These quilts were given as gifts for various reasons. 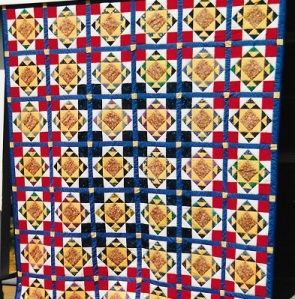 I have a friend who wasn’t married, but had a girl friend for nine years.  He asked me if I would make a quilt for him.  I replied, Yes, when you and A get married, I will make a quilt for you.  What is your favorite color?  It was blue.  I never expected them to be married so thought I wouldn’t  have to make the quilt. I was surprised the next year to hear of the wedding,  I made the quilt.  It is one of my favorite scrap quilts and is the first one that I machine quilted. Someday, I want to make another one in this pattern. 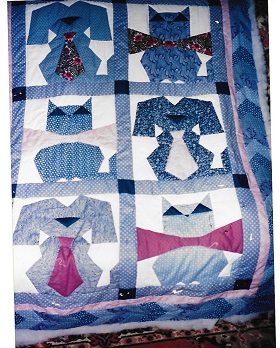 One of my co-workers married a much older man.  She had learned to quilt at my dining room table after work.  The office gave her a baby shower when she was expecting her son and this was my gift to her.  When she opened the present, she told everyone how wonderful it was and how hard that quilt was to make.  There are Y seams which I don’t find hard, but apparently she did. 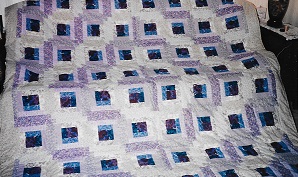 A family had a house fire in another city.  They lost everything,  I made this log cabin quilt for them, but don’t remember who they were.

The crocus are blossoming.  The garlic is up as well as sage, parsley and other herbs.  It’s time to rake the lawn and remove fallen branches.  The fertilizer and lime are ready to apply.  Spring must be here.

Blocks #9 and #10 from Kimberly Einmo’s book have been pieced. There are 21 blocks in the 10″ category in the book, so I am half way done with this project.

I have several different color iris.  They are all beautiful.  The purple and white iris is striking because of the contrast in colors. 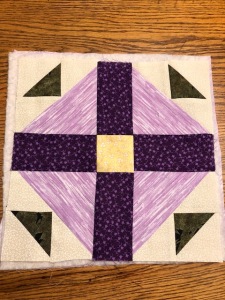 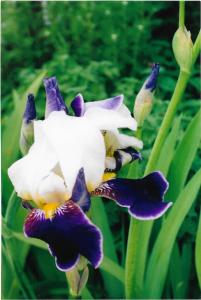 The Shasta daisy is a welcome addition to the garden.  They are sturdy and last a long while. 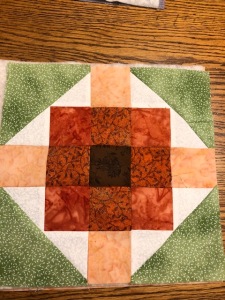 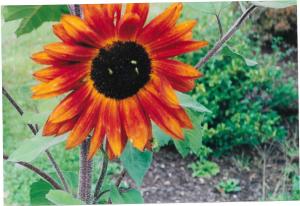 Soon, I will be able to use colors from current flowers.

I am still checking all my closets and the attic for UFOs.  There are so many.  The pile does not get any smaller. I find more every day.  I did find a stack of table mats that are  fun.  I can remember finding the watermelon seed fabric and making the mats.  Then, I went on to other things and put them aside. 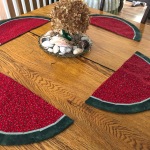 I’ve finished four.  They have a solid color backing.  They will go to the Charleston, Me firemen’s silent auction.

There are four watermelon slices left to finish,  I’ll find a seasonal fabric for the backing.  Maybe a Christmas theme.  That will make them reversible and I can use them in the winter,

I also found two lemon slices.  How fun is that!!  Great for a tea or a picnic.   The backing could be another season or holiday.  It takes just a few minutes to sew around the mats, The turning hole can be sewn while I watch TV.  They finish so quickly.

I must have used a template and cut with scissors when I made the mats.  I didn’t have a 10 degree ruler at that time.  Cutting out the pieces four at a time with the ruler would streamline the process.  A set of half circle table mats would make a great shower or Christmas gift.

This is the third quilt in the Miss Rosie Spice of Life book by Carrie L Nelson.  Carrie called this block Gingerbelle.  It is made of Irish Chain blocks and Ohio Star blocks.  Putting the two blocks together make a very interesting quilt.  Ideas of replacing the Ohio Star block with another block are running through my head.  That thought is way down the list of quilts to make in the future.

Carrie’s quilt is made from a fabric line that had ginger and green colors. 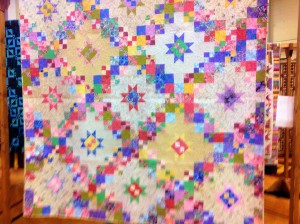 As my daughter and I were only using stash fabrics, we had no coordinated colors to choose from.  We used what we had.   My background was scrappy. 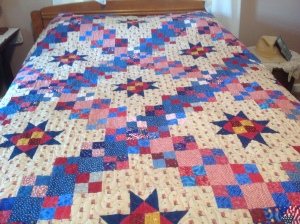 My daughter had enough background fabric to make the whole quilt.

It was so much fun to have a quilting buddy to work on a project.  We will have to do another one in the future.  But, it will be an easy, quick one.  Not one that took over our lives for almost two years.

I’m back from a short vacation.

This week’s gaa-barge started as fused fabric that was made into fabric bowls.  The cut off fabric was stored separately from my other fabric so I wouldn’t accidentally iron the fusible. 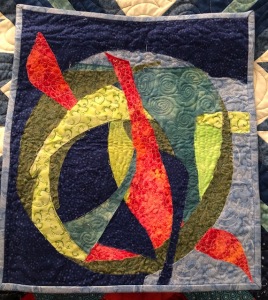 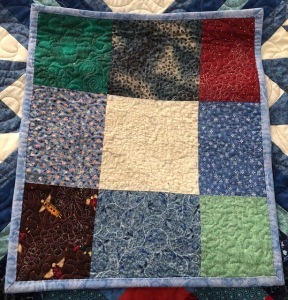 The back is a simple nine patch.

I was looking for some photos yesterday, when I came across an album of pictures of quilts and other objects that I no longer have.  They were all given away for gifts.  I thought that I would share the pictures with you from time to time.

I did a lot of embroidery work in that time period.  I noticed that several of the quilts have embroideries. They are so pretty.  I should take time to make some more.  I think that I stopped as everyone had their fill of my embroideries.

It does take more than pushing a button to make an embroidery.  Several embroideries were combined into one unit.  All the pieces also have free motion stipple quilting.  Then, the have borders and other finishing touches.

I still haven’t found the pictures that I was looking for.  I’ll keep looking.  Maybe, I’ll find another goldmine.

Have a great day and happy quilting,

The quilt at the last posting. 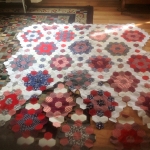 I am still working on my mother’s Grandmother Flower Garden quilt.  There has been much progress.  I am at the point where I have to decide if I want it to be one block wider and where I want it to end.  I have enough blocks to continue on to the bottom with the width that it is now, but, most of the blocks that are left have the red and white striped fabric.  They do look better scattered further apart on the left or right edge.  I do have some red and blue fabric that I bought for the quilt.  Maybe they could separate the stripes.  But, do I want to hand quilt a big quilt or a smaller quilt?  Lots of decisions.  I’ll take it one step at a time and give another update when decisions are made.  I’ve been basting many white hexagons.  I seem to always run out and need more. 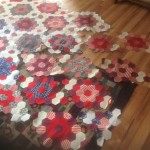 The pieces ready to add to the quilt.

I just realized that I have five long term quilts.  I did have six, but the Canadian 150 is finished,

The Temperature quilt has three months finished and I am up to date on this month’s high and low temperature.

Leah Day’s block of the month has three of the four rows sewn together.

Dear Jane has several blocks ready to bind.  I am making Dear Jane in the pot holder method.

Oh, there are still six  There is the mile a minute that I work on when I feel like it  I have been rearranging the part of the attic that I call the sewing room annex.  I found more UFOs and three bins of mile a minute fabric.

I will never run out of fun things to do. 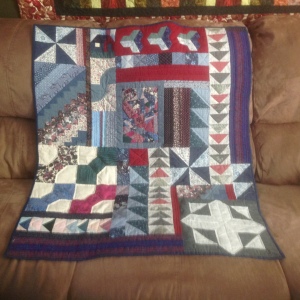 Quite often, when making a quilt or experimenting with a new procedure, there will be orphan blocks left over. Several years ago, when I looked at the orphan block bin, I found that there were two colorways and wondered how it would be if I put all the blocks from one of the colorways together into a wall hanging.
It was fun to lay out the blocks. When they didn’t fit, I added strips so the piece would lay flat. I still have the quilt top made from the other colorway, but it is in my UFO bin.

These two pieces were left over from trying curved piecing.

I had a class with Georgia Boonesteel and made a bargello vest.  This piece was left over from that class.  I have never worn the vest because I forgot that the piece would shrink in size when hand quilted.

I had a class in crazy quilting.  This piece was not finished, but was put into the leftover quilt anyway.  The colors were right.

I love making Inner-city blocks.    Originally, I was self taught and didn’t know that Y seams were supposed to be hard.  They are not. I will show you the original inner-city wall hanging at a later date.  It was one of my first wall hangings.

Flying geese, half square triangles, bow ties, paper piecing and  , pinwheels was included in this leftover piece.  I did a lot of experimenting when I began quilting.