Earlier this summer, the Maine Guild was challenged to make a block that was either a bird or a birdhouse. The names of the quilters who make the blocks were put into a drawing and I won the blocks.  This was so exciting.

They are so beautiful.  It will be so much fun to put them into a wall hanging.  I could size it so that it would fit over the sofa in my living room.  That way, I would think about  my guild friends in Maine all winter long while I’m in New Hampshire.

I expect that I will move them around on the design wall for a while until I find just the right placement. I don’t have a design wall yet but I have had the plans for one in my head for a long while.  This will be my inspiration to finally make one. 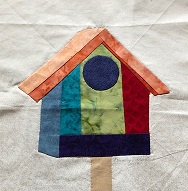 I have patterns for other bird houses and might add some more to the mix if I need more.

I’ve been machine quilting the Page 30 challenge.  The center is almost finished.  I have two more patterns to quilt.  The border is being quilted in two passes.  The first is done and I’m part way around with the second.  Unfortunately, I have run out of the thread that I’m using.  I’ll get some more next week.  There is enough of the border quilted so that I could sew around the edge to stabilize it and add the binding.  It should be finished in time for the reveal.

I did quilt a little on the Amish Thistle quilt.  I do hope to finish it some day.  It was started over thirty years ago and is being heavily  hand quilted with black thread.  The quilt has a center applique and is pieced in a medallion style.  Some of the rows are pieced blocks and some are solid black fabric. The feather quilting template for one of the rows was lost for a while.  I looked everywhere for it.  I did try Press and Seal as a pattern for one side of a row, but it does not work with hand quilting.    When I was unpacking boxes after moving, I found the template.  It wasn’t where I would expect it to be.  I had no idea how it got there.  I should concentrate on quilting the Amish Thistle and get it done.

Have a great d ay and happy quilting.