In family folklore, Nanna could go to a refrigerator and make a five course meal with what was inside. She was a marvelous cook.  I thought that it would be fun to try this.  My refrigerator needed cleaning anyway.  It would be two birds with one stone,

The five courses would be appetizer, soup, entre, vegetable, and dessert.

Appetizer – I keep Town House crackers and Cheeze it Crackers in my pantry.  I use Cheeze It crackers with a sandwich in place of potato chips.  The Town House crackers are used for a snack, sometimes with jelly and sometimes with cheese.  In the refrigerator is sour cream, mayonnaise, and onion.  I would make Linda’s Dip to go with the crackers.  It is my most favorite dip.  I received the recipe after an office pot luck party.  Linda brought the dip, thus the name.  This is the original recipe.  Even single cooks entertain at times.

Linda’s Dip  –  one 15 oz. container of sour cream, 1/2 c mayonnaise, 1 medium onion, chopped fine, 2 Tbsp. parsley, 1 Tbsp. Beaumont seasoning.  Mix all together.  It can be served with raw vegetables, chips or crackers.  Beaumont seasoning can be found in the grocery store. 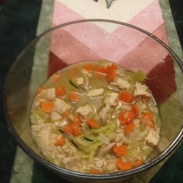 Soup – I found a container in the freezer that had parts of a chicken in broth,  At some time, I was going to make a soup and put the simmered chicken into the freezer.  I stir fried 1/4 c each of celery, onion, and baby carrots.  This mixture was added to the broth.  Then the meat was taken from the bones and added to the pot.  Then I added about 1/4 cup of brown rice,  a small handful of spiralized zucchini,(more on that later.) salt, pepper and Mrs. Dash seasoning.  I made a little soup, not a large on like I usually make. 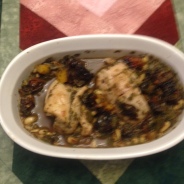 Entre – I found two small pieces of chicken breast in the freezer.  Tucked into the refrigerator drawers was some dried tomatoes, basil pesto, and pine nuts.  I pan fried the chicken.  The pine nuts were toasted in the oven.  The dessert was cooking in there and  the oven was on.  Then I deglazed the  pan and added the above to make a sauce.  All went into a casserole dish and baked for 20 minutes at 350 degrees.  This might be good with some pasta.

Vegetable –  I bought a spiralizer on a whim and had never used it.  My daughter had brought me a delicious dish that she made using her spiralizer, so I thought I needed one.  I had zucchini and sweet potato in the refrigerator and used half of each.  It made a very large pile  of vegetables.  They are stir fried in olive oil with sesame seeds.  A very delicious and low calorie  addition to the meal.

Dessert – Raspberry , white chocolate cheese cake.  I have a raspberry bed Two years ago, it outdid itself and I froze a lot of berries.  Last year there were no berries, so it is good that I have some in the freezer.  I thawed and strained a package of berries, added some sugar and cornstarch.  It cooked in a pot until it thickened just a bit. Melt about 1/2 c white chocolate chips in the microwave a few seconds at a time.  For the crust, I used one whole wheat pita bread, It was made into crumbs in the food processor.  I added 2 Tbsp. sugar, about 1 Tbsp.  melted white chocolate, and one Tbsp. melted butter .  It was pressed into a 7″ pie plate.  Mix one square cream cheese, 1 egg, 1 tsp vanilla, 1/4″ milk, and melted white chocolate.  Pour half into pie plate, drizzle 3 Tbsp. raspberry over and repeat. Swirl with knife to create marble top.  Bake at 325 degrees for 30 minutes.  This is not only very pretty, but very yummy.

This is far more food than I could possible eat in a day.  I did get the refrigerator cleaned out, but I also did spend a lot of time doing dished and cleaning up.  Will I try making a five course meal  again?  Probably not.  I just have to pay more attention to what I put into the refrigerator and freezer.