I had made over 20 Gaa-barge pieces.  They were made from scraps that were left over from other projects.  Also left over thread .  Anything picked up off the floor or taken out of the waste basket.  Most were made with traditional quilting methods.

I decided to make an underwater scene with cut out fish from a leftover scrap.  A peacock feather became a piece of coral.  I did some thread painting and it turned out very nice.  After I made the underwater scene, I wondered if I could make a landscape out of the tiny bits and pieces of fabric that should have been thrown away.  When I was working, I had several photos taped to my work station.  They were of places that I had been and enjoyed.  Maybe I could use the photos and commit the scenes to fabric.  The scenes were small so the first thing that I did was enlarge them to 8″ by 11′.  It seemed the perfect size for a small wall hanging.

The first one that I made was terrible,  It was a mountain scene in N. H.  I had written a mission statement before I started the Gaa-barge project and it stated that no matter how bad a piece was, it would remain in the project. This one is still with the others, mainly to remind me that not all quilts are successful.  Some are really, really bad.

I worked out a technique that was satisfying and actually taught classes on how to make a Landscape Gaa-barge quilt.  The students enjoyed the process and made some awesome pieces.

The photo was taken in Provincetown, Massachusetts on a trip that we took with my Mom and Dad,  I have such fond memories of out trips together. 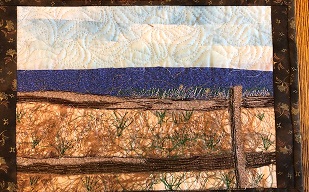 The wall hangings are an interpretation of the photo and are not an accurate copy of it. Thread painting adds a lot of detail.

I keep the photos in a baggie that is stapled to the bottom of the wall hanging.

I have several of these little scenes and will probably make more when I find a landscape to copy.  I started one and am bogged down with it.  It is sitting in a drawer until I feel the urge to finish.  Quilting should be fun and this piece was not.  I was trying too hard to make it perfect.