The first gaa barge piece is scraps made into a crazy quilt block.  The seams were covered with built in stitches in the sewing machine.  This would make a very pretty large quilt.  It would be a good way to use up a lot of scraps.  The quilting could be done on the machine in a very short time.  It would be fun to make a sampler type quilt and quilt each section with a different built in stitch,

The second piece Is made of thread that was cut off in the beginning of embroideries.  It is covered with tulle and beads are couched on.  For some reason, this piece is heavy and wants to be folded in half so it would make a very nice book cover.

The iris are beautiful this year.  I had planned to separate the bulbs because they were all jammed up, but didn’t get around to it.  It didn’t matter as they outdid themselves and made a beautiful display.  The massive display was battered by the last rain storm so I didn’t take a picture. These are pictures of a few that were left standing. 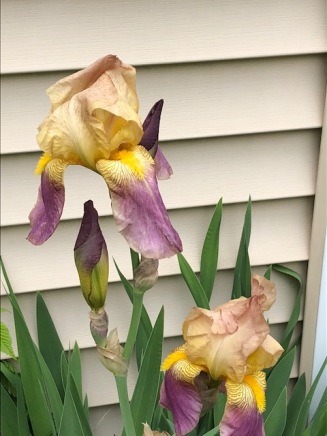