I saw a deer in my back yard this morning.  I knew that they were back there, but had never seen them.  One of my neighbors says that they are around my shed at times. I just never look out or work in the garden at the right time.  I know now why I take pictures of my flowers every year.  It’s so I can remember how the flowers are supposed to look if something happens to them. The deer must have gone to the front of the house, because they had a feast on my Hosta.  This is a picture of the hosta that was taken last year. 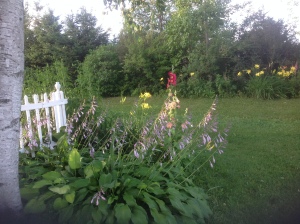 This is this year.  It looked as if the Hosta was string trimmed.  This is a month’s growth. 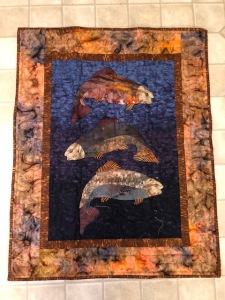 Several years ago, I saw a pattern at the Vermont Quilt Festival.  The vendor also had the background fabric which went from dark blue to medium blue.  It was perfect.  I used batique fabric for the fish.  The fabric had occasional dots which I used for the eyes.  It was hand quilted.  A friend asked me to put it into a show, so I did.  Later I heard that several people went to a quilt shop in Bangor looking for the pattern and the fabric.  They soon ran out and started asking if the customer had been to the show.  It caused quite a stir at the time.  This was the first time that I used batique fabric.  It also combined two of my favorite techniques, applique and hand quilting.