My Guild in Maine is having a block draw.  We were given a pattern and two fat quarters of beautiful fabric.  The fabric was to go in the flying geese row, just outside the center star.  We added our own fabric for the rest of the block.

The block is 18″ square finished and is made of flying geese. squares,  and half square triangles.  It was easy to make even though it looks complicated.  Someone from the Guild will win all the blocks in a drawing.  Even if I don’t win the blocks, I have the pattern and might make more blocks for my own quilt. 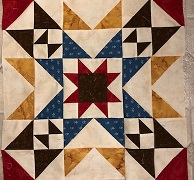 I’m still working to catch up with the Moda Blockhead series.  I made a 24″ block.

The next block was a 12″ square  applique block.  I didn’t want to make an applique block, so I substituted the draw block, leaving out one row to make it the right size.  It was quicker to make that the original block.  The omitted row had eight small half square triangles in the corners.  Leaving out that row didn’t detract from the block.  It looks like a star within a star block.